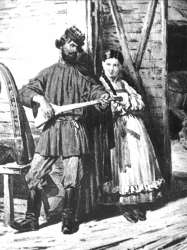 The balalaika is one of a family of Eurasian musical instruments with long necks, few strings, and a playing technique based on rapid strumming with the index finger. First mentioned in written records in 1688 in Moscow, the balalaika existed in various forms with triangular and oval bodies, differing numbers of strings, and tied-on string frets, and was mainly used for playing dance tunes.

The traditional balalaika’s popularity may have peaked in the last decades of the eighteenth century, when foreign travelers reported seeing one in every home, although as numerous references in the works of , Nikolai Gogol, Fyodor Dostoyevsky, and others attest, it remained in widespread if diminishing use during the nineteenth century. Most closely associated with the Russians, the instrument, likely a borrowing from the Tatars, was used to a lesser extent by Ukrainians, Gypsies, Belarussians, and other ethnic groups. 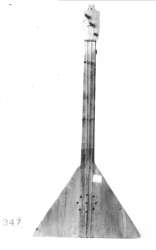 The modern balalaika originated from the work of Vasily Andreyev (1861 – 1918), who in the 1880s created a standardized, three-string triangular-bodied instrument with fixed metal frets and other innovations. Andreyev went on to develop the concept of the balalaika orchestra consisting of instruments of various sizes, for which he later reconstructed the long-forgotten domra, a favorite instrument of the skomorokhi, or minstrels.

The modern balalaika is a hybrid phenomenon incorporating elements of folk, popular, and art or classical music and is widely taught from music school through conservatory. In addition to its use in traditional-instrument orchestras and ensembles, the balalaika’s repertoire includes pieces with piano and other chamber works, a number of concertos with symphony orchestra, and occasional appearances in opera. A vanishing contemporary village folk tradition, while possibly preserving some pre-Andreyev elements, utilizes mass-produced balalaikas played with a pick. Throughout much of its history the instrument has been used as a symbol of Russian traditional culture.