This is a screen shot of the DVD’s main menu: 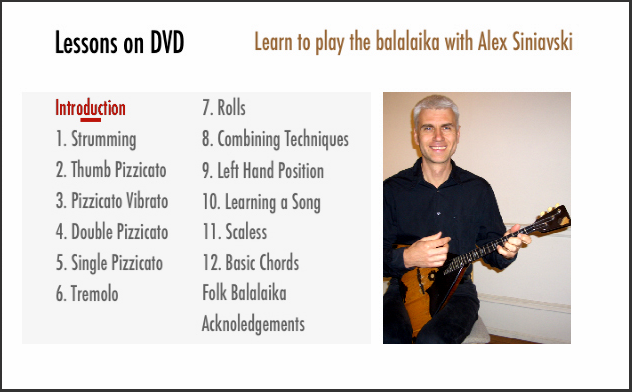 THE BALALAIKA TUTORIAL ON DVD is the easiest way to learn all balalaika technics. This well composed tutorial is an interesting source of knowledge for those who just starting to learn how to play the balalaika and for those who already have some experience. No balalaika secrets were left behind on this great video lesson. You will see it all with your own eyes and learn from the best in the world. THE BALALAIKA TUTORIAL ON DVD consists of 12 lessons and is about 45 minutes long.

The author of THE BALALAIKA TUTORIAL DVD is acclaimed balalaika virtuoso Alex Siniavski who arrived in the United States in 1992 from St.Petersburg, Russia. Alex was a leading member (balalaika prima) of the Andreev State symphonic balalaika orchestra, the most prestigious in the former USSR and Russia. Mr. Siniavski graduated with honors from the Leningrad State Musical Conservatory.

click on the pictures below to see a 30 second demo

WHAT OTHER PEOPLE SAY:

Alex Siniavski has made it possible for everyone to have private lessons in their own home with his wonderful “12-step program” for balalaika players, and potentially achieve intermediate (or, perhaps, virtuoso ?) level…
…Has your balalaika technique become unmanageable? Alex’s DVD, The Balalaika Tutorial, with its extremely useful downward camera angle… .imagine looking down from your own eyes to your right hand.. .can repair all the damage that years of playing without a virtuoso teacher have done. Using mainly Svyetit Mesyats (Bright Moon), Alex walks you through strumming, thumb pizzicato, pizzicato vibrato, double and single pizzicato, tremolo, rolls, combinations of techniques, tips for the left hand and learning tunes, and some fantastic cross-string scale and chord scale exercises…

Read full Article by Judy Sherman from the BDAA newsletter, the official journal of the Balalaika and Domra Association of America.

I just wanted to say how I have apprecated your DVD. It has answered questions I have had for many years. Basically, I have been learning from a book (Ilyukhin, samouchitel igry na balalaike) and from listening to recordings. Although I had “mastered” a basic technique for strumming and for tremolo, I really had no idea about pizzicato, especially single pizzicato. So, I am very grateful, and there is a lot of material for me to work on for a long time…
S nailuchshem pozhelaniyem,
Robin Westenra
Saturday, April 29, 2006